The properties of an artifact are its history, material, construction, design, and function.

The Wooton desk originated in Indianapolis, Indiana, by William S. Wooton, where in 1870 the furniture business was flourishing.[1] The original marketing campaign stated that the desk was “A place for everything and everything in its place”.[2] This new modern desk, at the time was supposed to revolutionize the office space, by being able to fold up conveniently to allow the space it occupied freedom to preform other activities.

Frances Willard received the desk as a gift in 1884 with an inscription on it reading “To Frances E. Willard From The White Ribbon Women of the Nation 1884.” Apparently, however, she had no personal interest in using the desk. When Anna Gordon moved in as Frances Willard’s secretary, Frances gave the desk to her to use. Anna found that the desk with its many cubbies and individual spots for items was very practical in helping to keep her work organized. By day she could have the desk open and use it for her work, which included correspondences for the WCTU, paperwork, meeting with Frances guest among other things, and during leisure time she could have it folded away and the space could be used to facilitate other activities. The desk came to be at Rest Cottage during a time of conspicuous spending in America during the later half of the 19th century, when people came to value fancy and expensive furniture that was also practical for work use.

The Wooton desk and manufacturing took place in Indianapolis, Indiana, during the 1870s. The city during this time was located in the center of a great hardwood area, which provided the Wooton manufacturers with supplies of oak, walnut, ash, poplar and other woods.[3]

On 6 October 1874, the Wooton desk, officially called “Wooton’s Patent Cabinet Office Secretary,” came into being when the United States Patent Office issued patent number 155,604 to William S. Wooton.[4] During the following months Wooton hired professional craftsmen to construct the desk and they produced around 150 per month to be sold all over America and Europe.

The Wooton desk was made to resemble a cylinder front desk when it was closed. The front of the desk opens vertically from the center, and the two doors open like a cabinet. On the inside of the two doors that are pulled open you have numerous shelves or pigeonholes depending on the style and modifications. Many of the models had in their wing a small compartment with a glass-paned door to serve as a letterbox.[5] The 1876 catalog stated that the desks’ “exterior cases are constructed of black walnut, polished French veneers and rich carvings, contrasted with black and gold, according to the grade.” Pine, poplar, maple, holly, and satinwood were listed as raw materials, and “the hardware is made expressly to suit the requirements of each part, and is of ornamental Berlin bronze, real solid bronze or gold enameled”.[6]

During the WCTU operating business hours Anna was likely to be found at her desk, working on papers, keeping documents in order, writing correspondences, dealing with visitors and the desk was a primary tool to help keep her work organized and less cluttered.

During leisure time the desk could be folded up, which would hide the littering of paper and office work in the space. With the desk folded up her office now was just the main entrance room to Rest Cottage and could be used for other activities such as prayer, dining, reading or just as a space for casual conversation and relaxation.

The utility of the Wooton desk can be used to describe the women of the WCTU who were also very versatile. They turned Rest Cottage into an office space by day where many members of the WCTU worked– and by night, the home transformed into lodging for guests. This was not a typical house, as it was key to operations of the world’s largest woman’s organization of the time. 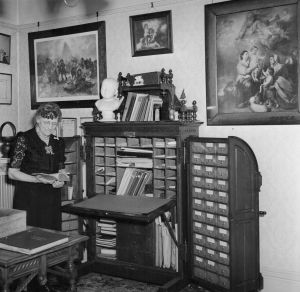 There are four different types of Wooton desks. The ordinary grade, standard grade, extra grade and superior grade desks. The main differences in these grades are the size of the desk, the type of wood and different linings used on the desk and of course price which would range from 90$ to 750$. There is also a fifth type of Wooton desk that was made specifically for women secretaries and these desks were made to be a bit smaller, but no extant examples can be found.

The Wooton desk at Rest Cottage has many traits of the ordinary and standard grade Wooton desk, which makes sense for the size of the desk the WCTU needed for business operations. The Wooton desk at Rest Cottage today is still in great condition, especially when you consider that its over 120 years old. This goes to show the craftsmanship that went into building these desks and how Anna Gordon and the WCTU took great care to handle the desk well as time went by.

Understanding the role of the Wooton desk during the late 19th century can help us understand how we use devices today. The Wooton desk when it was first developed was cutting edge Victorian style technology, which was seen as the new and improved way to help maintain office work especially now that with the invention of the typewriter and fountain pen, paper work in the office was at an all time high. Today we still use desks and they can still very much be cluttered, but we also have new ways of keeping our work organized, whether it be folders and filing cabinets, or flash drives and computers.The technology may have advanced, but the functions of desks are still needed. Just as it was in the late 19th century with conspicuous consumption today we have material consumerism where people want to have the latest and greatest gadgets and technology. The Wooton desk of the late 19th century is the big expensive computer of today. People in today’s culture still have a great need for keeping things organized. Modern tools for organizing have changed in the computer era, but they still try to serve the same function. As the picture above shows a clearly organized office, computers have helped people today be able to manage many files all in one space. Also the Wooton desk at Rest Cottage was partially unique, because it was in a place of residence. Today many people have home offices and work from home. So even though over a century has passed the functions of the WCTU in the late 19th century are still very much alive in modern times.