“One’s house is more than mere shelter; it is a personal and social testament…” 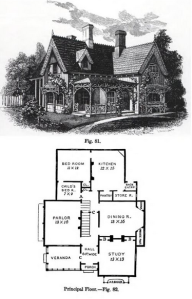 This year marks the sesquicentennial anniversary of the Frances E. Willard House in Evanston, IL. This Victorian Gothic cottage, modeled after a pattern by Andrew Jackson Downing (1815-1852), was built in 1865 and came to be known as “Rest Cottage.”

One of the most distinguished occupants of the house was Frances E. Willard (1839-1898), who became internationally famous in the struggle for temperance, woman’s rights, and social reform. Almost immediately after Willard became involved with the WCTU in 1874, the house began to transform from a mere domestic space, into a place where women both lived and worked. Its versatility as a place that accommodated and negotiated domestic space is telling of the larger social and cultural changes happening at the end of nineteenth century America.

A museum since 1900, and a National Historic Landmark since 1965, this space has many stories to tell. After ten weeks of research in the Frances E. Willard Memorial Archives, a group of students from DePaul University have developed this site to tell the story of the Rest Cottage as well as to analyze how social interactions and spatial dimensions interplay inside and outside the house. Each page has its own theme and aim, yet the overarching goal is for us to explore physical and social changes at the house over time. In this sesquicentennial year of Frances E. Willard’s Rest Cottage, we hope you enjoy!