What do we consider “home” to be? Is it a physical place? A feeling? Is “home” a place with others or where one is alone? For Frances E. Willard, “home” was both a place and a feeling, occupying physical space and emotional thought, both with her loved ones and alone.

Though she was born in Churchville, New York in 1839, Frances spent most of her early years living in Janesville, Wisconsin in a farmhouse named ‘Forest Home” [fig. 1]. Taking on the pioneering spirit of many nineteenth-century Americans, the Willard family embarked on on a journey West to find a place in nature they could settle and that would become their own. ‘Forest Home,’ in the words of Frances written in Glimpses of Fifty Years: The Autobiography of an American Woman, was “a farm we made out of the woods and prairies, little by little, putting up all the buildings and stocking it so well that it became the prize farm of Rock county.”[1] Frances lived with her father, Josiah Willard, who was a gardener and pomologist (that is, a fruit scientist); her mother, Mary Hill Willard; older brother, Oliver Willard, who would later become a minister; and Mary Eliza Willard, Frances’ beloved younger sister [fig. 2].

Frances’ years spent at ‘Forest Home’ were full of learning, activities, and personal growth that profoundly influenced the woman that she became. Raised in this rural setting, her father taught her to classify different species of plants, track weather patterns, to shoot a hunting rifle and trap birds, run about and do her ‘gymnastic’ exercises, and to ride horses. Allowed to participate in such activities, notably, alongside her older brother, shaped Frances Willard’s views on an egalitarian society that would benefit girls and boys, men and women. In Glimpses, she writes,

Happy the girls of the period who practice nearly every outdoor sport that is open to their brothers; wear gymnastic suits in school, flee to the country as soon as vacation comes, and have almost a blessed a time as we three children had in the old days at Forest Home. It is good for boys and girls to know the same things, so that the former shall not feel and act so overwise. A boy whose sister knows all about the harness, the boat, the gymnastic exercise, will be far more modest, genial and pleasant to have about. He will cease to be a tease and learn how to be a comrade, and this is a great gain to him, his sister and his wife that is to be.[2]

The Willard children’s formal and religious education was also important to Josiah and Mary Hill Willard. Frances’ love of knowledge had been instilled within her from an early age. She describes a time when she was twelve years old when her father “brought home from Janesville an elegant card announcing that a college-bred gentleman from the East was about to open a classical school in that town.” Around the edges of the card was a Latin inscription Scientia auctoritas est et labor vincit omnia, which translated to, “Knowledge is power and labor conquers all things.”[3] Frances contemplated these words and writes, “Very many times I said them over to myself, much more I though about them, seriously determining that I would attain knowledge so far as in my lay, and that I would compass the results which labor can achieve for one who is in earnest.”[4] Josiah and a neighboring father built a schoolhouse [fig. 3] for the girls to attend, which was located about a mile from ‘Forest Home.’ Frances’ writes about her first day of school in her personal journal in an entry from January 21, 1856 when she was sixteen years old: 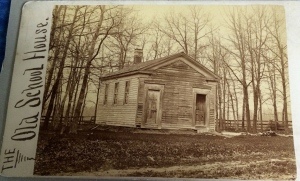 Monday.- May [Mary Eliza] & I got up long before light, & got ready for school-

The long wished for climax just, at last, at hand! Our “tin pail of dinner,” “satchel of books,” “hoods & cloaks,” waiting for us…. 5 o’clk-Have just returned from the first day of school in our new school house-Have enjoyed it exceedingly-Have tried to learn my lessons well, & do the best I knew how, & feel, tonight, satisfied with the world, myself, & “the rest of mankind.”-Mr Hodge is I think an excellent teacher…[5]

A year later, Frances would travel to Milwaukee to finish her schooling where her aunt was a teacher. Though moving to Milwaukee meant leaving her beloved ‘Forest Home,’ Frances’ desire to better herself and learn more than what the rural school house had to offer motivated her to take on the challenge and enter into an unfamiliar environment away from her family. Frances’ move away from home is comparable to a student moving away from the familiar comforts of home in order to go to a boarding school, college, or university– there’s that mixture of nervousness, fear, and excitement rolled into one! A journal entry from April 27, 1857 reveals how happy Frances was to be back in school,

Entered upon school life! Am in a room with 115 girls & young ladies. Am truly “a stranger in a strange land,” but shall soon get acquainted, study Botany, Geology, & History of the Middle Ages. Sit with a Miss Julia Blount. Mary sits with Miss Susy Spas- attended lecture on Italy by Dr. Baird in the evening. A busy life truly!![6]

Frances successfully completed her early education in Milwaukee by 1857, but her desire to learn was still not satisfied.

In autumn of 1858, the Willard family left ‘Forest Home’ and moved to Evanston, Illinois, where Frances attended Northwestern Female College. ‘Swampscott’ [fig. 4], located near Lake Michigan, became the Willard’s new home, leaving ‘Forest Home’ to new tenants.[7] However, Frances’ beloved childhood home would remain a vacation retreat on school breaks, much to her joy. Evanston enticed the Willard family because it had a large community of Methodists and ‘Swampscott’ provided a large plot of land where Josiah Willard was able to cultivate a variety of plants taken from ‘Forest Home.’ Frances Willard’s education at Northwestern Female College was rigorous and her religious beliefs were not yet fully formed. However, Frances would graduate with the highest praise from her peers and teachers, as well as a concrete belief in God. In a journal entry from September 26, 1859, Frances reveals how happy she is to have returned to ‘Forest Home’ after graduating from Northwestern Female College:

At “Forest Home” once more! Have been here, & hereabouts for several days. As I sit in “Father’s Room” this morning, while the rain falls fast and the sky is overcast,- can hardly realize that I have ever left home. Dear, familiar room! The book case in its corner, the table with its load of papers and packages under the East windows-the maps, the stove, the chairs,-ay, even that very rocker where Mother sung us to sleep when we were children! I’m sitting in it now. the spell of memory is upon me-I am thinking of the sweet old days that never will come back.[8]

The bittersweet realization Frances describes (“I am thinking of the sweet old days that will never come back”) is reconciled in a journal entry dated September 28, 1859—Frances’ twentieth birthday:

Yes, I have seen twenty years. God forgive me for the little of good, the much of evil that I have done! I have lived twenty years, & no soul is the better or the happier! I have breathed the refreshing air of so many beautiful young springs; seen so many summers round into splendor, dreamed through the hazy autumns & the winters severe. Well, anyhow the world has been good to me,-I find it pleasant to live. I hope I am thankful for the calm happy life I’ve have enjoyed. Childhood was holy & sweet, but it has passed away; youth is strong & courageous-youth the dewy & balmy! Youth the vigorous & tense! Your energy inspires me now. If not in my eye, yet is the eagle light gleaming in my heart![9]

In this excerpt, Frances looks forward to what is to come in her life; she sees her ascension into adulthood as an opportunity. Her childhood at ‘Forest Home’ was a happy time, which had propelled her forward into a young woman ready to make a difference in the world. Frances’ first step away from home by moving to Milwaukee prepared her for whatever opportunities would come her way. She concludes the entry with “Repining not, may I accept my destiny.” However, life events proved to not move quickly enough for Frances, as her journal entry from May 28, 1860 illustrates:

I am twenty years old and I have neither dignity nor womanliness. I am giddy and thoughtless-as much so as I ever was, I verily believe. There is a something that I can hardly define, but which the word “Character” seems to me to express, that I lack, and which I must acquire. I am not reliable; self-contained; There is not that about me-which those of my age ought always to possess,- which causes people to “keep their distance,”-to have a certain respect for me that will not admit of familiarity.[…] 10]

This excerpt is telling of Frances’ struggle for self-acceptance and finding purpose in the world. Even in today’s world, many early twenty-somethings struggle with the same questions: Who am I? Why am I unlike others? How can I fit in? What do I contribute to those around me? Where do I belong?  She believed herself to lack ‘character’, to lack beauty, and to lack a general knowledge of “society,” which, elsewhere in this journal entry, she attributes to her being “‘trained’ to live ‘out doors’ as much as possible” in Forest Home in Wisconsin.  Although self-critical, at the age of twenty, Frances was determined to find where she truly felt she belonged and could make a difference in the world around her.

Frances began her career as an educator in 1858 and left the vocation in 1874; she taught approximately two thousand students in eleven different institutions and in six separate towns during this sixteen-year period. [11] Constantly seeking new opportunities and finding routine irksome, Frances never stayed at one institution for long. She was determined to teach because she wanted to be independent above all else. Though Frances’ ambitions were high, she did not like how far she was away from home and felt that teaching was not her true calling in the world.

[11] Frances E. Willard, 133. During summer vacation in 1858, she taught at the district school near ‘Forest Home’, followed by a public school in Evanston for one term, Harlem for two terms, Kankakee Academy for one term, Northwestern Female College for two terms, Pittsburgh Female College for three terms, the Grove School in Evanston for one year, the Genesee Wesleyan Seminary in New York for three terms, the Evanston College for Ladies for two years, the “Woman’s College” for one year, and finally was a professor at Northwestern University for one year.