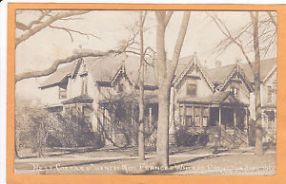 It was not until 1874 that Frances found that long-sought after feeling of belonging, purpose, and home.

When the Willard family came to Evanston in 1858, they found a prohibition village—a “Methodist heaven”—the charter of the University, which forbade the sale of any alcoholic beverage. Circa 1863-65, a man named L.L. Greenleaf founded a “Temperance Alliance,” who modeled Evanston after another temperance town located in Vermont. Frances had read a few temperance essays while she was a teacher, but had never considered total abstinence from alcoholic beverages until she returned from travels abroad in 1870 to the new Willard home named ‘Rest Cottage’ [Fig. 5], which was constructed in 1868.[12]

In 1873, the woman’s temperance crusade, beginning in December in Ohio, battled for temperance in an effort called Home versus Saloon. Frances’ brother, Oliver, at the time was the editor of the Chicago Evening Mail and provided her full accounts of the proceedings. In Glimpses of Fifty Years, Frances writes, “Meanwhile it occurred to me, strange to say, for the first time, that I ought to work for the good cause just where I was—that everybody ought… and I believe that in this simple change of personal attitude from passive to aggressive lies the only force that can free this land from the drink habit and the liquor traffic.”[13] Frances was not the only one roused to action by the woman’s temperance movement; Chicago female church members were gathering signatures for a petition that would make saloons closed on Sundays. 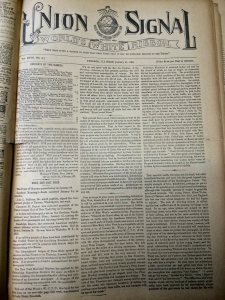 Frances would join these efforts and work with other church groups as well to aid the temperance cause. She was formally invited to be a part of the movement and be president of the Chicago Woman’s Christian Temperance Union (WCTU) in 1874. Frances spearheaded her Chicago chapter and began speaking to audiences around the country, including much of the Midwest, New England, and Washington D.C. to name a few. Her organization joined with other woman’s temperance groups and launched The Union Signal [Fig. 6], which was a weekly periodical, handling “a hundred and thirty thousand dollars and sending out over sixty million pages of literature” by 1888.[14] By 1879, Frances’ impressive temperance work earned her the title of President of the National Woman’s Christian Temperance Union—a position she would hold until her death in 1898.

As President of the WCTU, Frances expanded the temperance mission to work for a variety of reform including woman’s suffrage, labor rights, poverty, and moral reform. Her greatest effort went into woman’s suffrage when she formulated “The Home Protection Ballot” [Fig. 7], which she describes in Glimpses of Fifty Years as the way “to speak 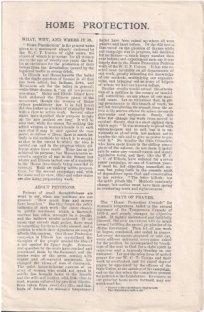 for woman’s ballot as a weapon of protection to her home and tempted loved ones from the tyranny of drink.”[15] By campaigning for woman’s suffrage in a way that would protect women and their homes from the effects of alcohol, she was able to force the question of women’s right to vote into the political sphere in compelling terms that did not directly address gender equality, but rather spoke to a larger social issue. Though Frances believed in gender equality, she knew that the political and social climate at the time would not bring about women’s suffrage without an issue such as home protection. At a time when women had little or no control over the family’s finances, and the men would spend excessive amounts of money in saloons, often becoming violent towards their wives and children, Frances and the WCTU saw women’s right to vote as a way to protect the integrity of the home. To call attention to the “Home Protection” cause, she traveled around the country, only returning home for a few weeks a year at the height of her temperance work, while her good friend, Anna Gordon, remained at ‘Rest Cottage,’ running other aspects of the WCTU serving as Frances’ personal secretary and seeing after Mary Hill Willard.

The National WCTU’s efforts soon spread around the globe and subsequently the World’s WCTU was established in the hopes that, in Frances’ words, “All modern thought and effort are tending toward this universal federation, which it is hoped will one day control the world’s forces in the interests of peace and of every right reform.”[16] Because of Frances Willard’s efforts, women around the globe rallied for the cause, creating mottos such as “No sectarianism in religion,” “no sectionalism in politics,” and “no sex in citizenship,” which brought all women together, despite regional, religious, and economic differences. In Glimpses of Fifty Years, Frances writes, “We believe that woman will bless and brighten every place she enters, and that she will enter every place on the round earth. We believe in prohibition by law, prohibition by politics, and prohibition by woman’s ballot.”[17]

It was through the WCTU that Frances Willard was able to find her purpose and sense of belonging. 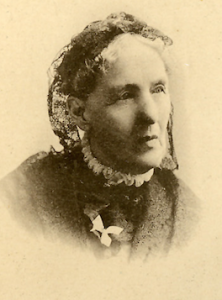 Her pioneering spirit and upbringing at ‘Forest Home,’ education, travels, teaching experience, family, and religion came together in the temperance movement. WCTU operations were eventually conducted from within Willard’s family home, ‘Rest Cottage,’ in Evanston, Illinois, which symbolizes the amalgamation of France Willard’s beliefs and values. For Frances, home was more than a house or a physical place. To Frances Willard, “home” was where her heart was—with her beloved mother and her activism with the WCTU— both of which were centered in ‘Rest Cottage’ from 1874 until Frances’ mother’s death in 1892. When Mary Hill Willard died, Frances could not bear to live in ‘Rest Cottage,’ as every element contained within the walls reminded her of her mother [Fig. 8]. ‘Rest Cottage’ no longer held 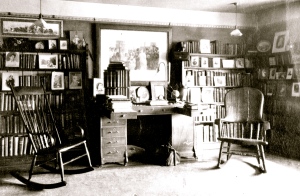 the joys of home, only the unbearable reminder that her mother was gone along with her father (d. 1868), brother (d. 1878), and sister (d. 1862). Even ‘The Den‘ [Fig. 9], Frances’ office/study and the heart of ‘Rest Cottage,’ where she conducted WCTU operations became “a dumb dwelling” filled with too much memory of her loss. Frances resolved that she needed to leave her once beloved ‘Rest Cottage’ in order to mourn.

Though many members of the WCTU offered to shelter and comfort her, Frances chose to travel to England and stay at the residence of her good friend and supporter, Isabel Somerset, in Reigate. The two women had become acquainted at a World’s WCTU conference in Boston in 1891 and soon became indispensible to each other’s efforts. Though Frances was grateful to her friend’s hospitality, she longed for her former days at ‘Rest Cottage,’ when she, as chronicled in a personal journal entry, […] Came home so cheerily& gladly to my humming hive of a Rest Cottage—so safe & sheltered & to dearest Mother & Anna my truest & nearest two.[18] 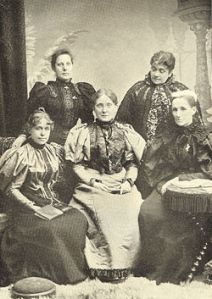 Though she was mourning, Frances kept busy in England by helping Isabel Somerset with the British Women’s Temperance Association, having active correspondence with the WCTU, especially Anna Gordon, and traveling and speaking around England advocating for the temperance cause [Fig.10]. Frances’ personal journals indicate that she spent 1893 in England, though she eventually split her time traveling and speaking for the cause between the United States and abroad by 1896. Frances’ personal journals later in life show her growth in dealing with her mother’s death, how she dealt with the growing demands of the Nation and World WCTU, and the decline of her own health.

Frances Elizabeth Willard peacefully died in her sleep on February 18, 1898 in New York while preparing to visit England and France. After her mother’s death in 1892, Frances never truly went “home” again. Although she spent her last years tirelessly working for woman’s rights, traveling around the United States and abroad, she could not bear to return to ‘Rest Cottage.’ Frances kept her fond memories of ‘Rest Cottage’ with her mother alive in many entries in her personal journals, but there was too much sadness contained in the walls of the house for her to ever go back. “Home” for Frances was where her 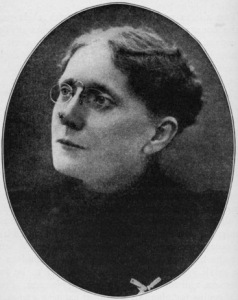 heart was filled by the presence of her mother and her work with the WCTU; she needed both elements to truly feel at “home.” After 1892, Frances’ work with the WCTU was not enough to fill her heart’s missing half and she never found “home” again. Frances’ mother was in her heart, her work was in her heart, and her “home” was within her self—losing one brought the loss of her own self and her feeling of “home,” which was symbolically expressed by leaving her beloved ‘Rest Cottage,’ never to return again.